Beginner’s Guide to Video Game Design and Development: What Salary Can I Expect? 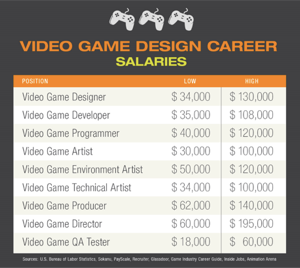 A video game designer is the concept master of a video game’s development cycle. The position is rarely entry level, requiring experience in development processes as well as techniques. The designer takes an original or existing game concept and turns it into a fully realized game by experimenting with several different gameplay styles while considering a game’s deadline, audience, technology, and budget. The Bureau of Labor Statistics puts video game design into the category Multimedia Artists and Animators — a group of people it says makes an average of $63,970 per year. While that’s a start, to speak about video game designer salaries specifically means we need to talk about a range of salaries. A starting video game designer makes around $45,000 a year, though that pay can go as low as $34,000 a year. With seniority, these wages can rise to around $100,000 a year — even as high as nearly $130,000 yearly. One of the most competitive game design markets is the state of Washington, home to video game companies like Nintendo and Microsoft Game Studios. Southern California (home to big names like Activision and Blizzard) or the Silicon Valley/Northern California (home to Electronic Arts) are also competitive markets.

Video game developers turn the ideas of video game designers and writers into the assets of the game, coding and building parts of a game like the user interface (UI) and gameplay systems using development tools. Their salaries average around $68,000 per year, but like Game Designer salaries, they can run quite a range. They can go as low as $35,000 a year, with some of the highest game developer salaries running between $101,000 and $108,000 in competitive markets like Southern California and the Seattle area. Game developer jobs are rarely entry level positions.

Video game programmers enter and perfect the software code that brings all of a game’s assets to life, learning and engaging with game development software and languages like C++ & Java. Video game programming offers good growth potential in terms of salary and the ability to easily transition in to other careers. Generally, programming for video games salaries start at around $40,000 a year, with a median salary of $62,000. Six or more years of experience can have the pay hit an average of $105,000 per year — even in some cases approaching $120,000 at big name studios like Naughty Dog.

The title video game artist can apply to many positions, including character artist, environment artist or technical artist, but these positions all help bring the visual assets of a game concept — what the player is going to see — to life. In general, video game artists will make between $30,000 and $45,000 per year starting out, with pay increasing to the $105,000 to $110,000 after six or more years of experience. Of the specialized video game artists, environment artists pull in an average of $63,000 per year, on a range of $50,000 to $120,000 a year. Technical artists have quite the range of pay as well — $34,000 to $100,000 per year, according to the U.S. Department of Labor.  These are becoming some of the most needed positions by companies since having smooth pipelines and workflows of game assets from content tools in to the game engine are a pivotal part of creating a functioning and fun game.

Producers are project managers for the game design process — in charge of its schedule, budget and deadline. They also oversee and manage the game design team working on the game. It’s a position of leadership, so you’re usually going to have to have a few years’ experience under your belt to be a game Producer. For that experience, the position pays an average of $62,000 to $70,000 a year. Executive Producers (“EPs”), those with several years of experience, will easily pull in six-figure salaries — as high as $125,000 to $140,000.

As with technical directors in animation, directors in video games have a lot of different responsibilities. You’re overseeing the creative vision and the game concept as a whole, as well as its overall direction. This position requires experience working with teams across multiple disciplines. Once a framework for the game’s development is laid out, the director will work with the game design team to iron out technical, visual and storyline elements. For these responsibilities, they make good pay, with the average salary going from $60,000 a year to around $110,000 a year — with some salaries even being reported as high as $195,000 per year.  Directors usually have deep creative skills and bring this knowledge to the project to collaboratively guide teams.

Of course, we have to touch on what may be a dream job for many — getting to play video games for a living to ensure their quality. It’s tough to have to pop that dream bubble a bit, but video game testers or quality assurance (QA) testers are on the lower end of the scale when it comes to pay for game design jobs. Jobs start out at just $18,000 a year, and generally cap out at $50,000 or $60,000 a year — after multiple years of experience. This is for the testers who are lucky enough to land full-time employment as a tester at all — most positions are hourly contractor positions, meaning no benefits either.  That said, there is quite a long standing history in the game industry of QA people eventually moving in to development positions. QA testers often have the ability to network and work directly with developers as they find bugs and issues in games.  In other words, they often have a “foot in the door” and the ability to network & find opportunity.

AAA developers with teams of hundreds of people are going to have a wide offering of game design jobs, but this gives you an idea of where the industry stands in terms of pay. To learn more about game design, check out our previous Beginner’s Guide on Game Engines or read what a USV alumnus learned by working on “Rise of the Tomb Raider.” You can find all of our Game Design Tips and Trends posts here.