With more than 10 video game titles and two feature film adaptions to its name, the “Tomb Raider” franchise has found impressive success for decades. Recently, the team at USV had a unique opportunity to hear game development lessons from one of the people who has made “Tomb Raider’s” success a reality. We spoke with USV alum Matt Bard, an environmental artist at developer Crystal Dynamics, who helped bring this series to life in its latest installment, “Rise of the Tomb Raider.”

Matt shared 3 pieces of game development advice from his experience developing the adventures of Lara Croft in the latest entry of the “Tomb Raider” series. 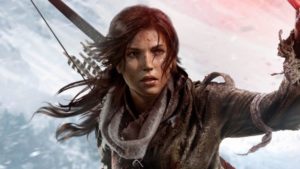 Environmental art has three main components — lighting, materials and modeling. While you might think modeling is the most important aspect of creating a scene, Matt says that’s not the case.

Lighting is the most important, followed by materials and modeling. “If you have unsuccessful lighting in a video game, it will fail,” says Matt. “It doesn’t matter how amazing the materials or models look, if it’s badly lit, it will fail.” Matt notes a lot of games have found success despite gray materials and simple models, because they had great lighting.

“The fact of it is that a lot of games ship with broken, janky, bad models,” Matt explains. “But with good textures and materials — and especially good lighting — consumers are going to love the game anyway.”

To land an environmental art role, having a strong grasp of lighting goes much further in helping you stand out in the talent pool — less so for modeling on its own. “If your portfolio has only untextured models with minimal lighting, you’re not going to stand out,” Matt says.

On “Rise of the Tomb Raider,” Matt says every member of the environmental art team has a basic understanding of lighting development tools. “We do have dedicated lighters on the team, who stay in the loop the whole time, but every environmental artist can lay down the basic values we need. The lighting experts then lay down the polish and make it look great.”

Game Development Lesson 2: You Have to Work with Assets You Didn’t Make

Outsourcing is a reality for game development — when you work on a game at a major production studio, you will not necessarily be working on the entire game. Different pieces and aspects of the game could done by different studios around the world. That means oftentimes you’ll be working with game design material or assets that your team did not originally make. For example, on “Rise of the Tomb Raider,” Crystal Dynamics partnered with parent company Square Enix Group’s Eidos Montreal studio, which has two full in-house teams. “That’s not to say we worked with everyone at Eidos Montreal,” Matt notes. “A much smaller part of the team joined us in making levels and area for ‘Tomb Raider,’ and that means we were juggling assets and art back and forth between studios.”

Matt also notes that game assets like the motion capture animation and facial animation for actress Camilla Luddington, who plays Lara Croft, was done by a third-party studio. Some of the levels in Rise of the Tomb Raider were made entirely in Eidos Montreal. “Unless you’re a company like Blizzard and have nearly unlimited funding, you’ll almost never see a big budget game made entirely in-house,” Matt confirms.

Game Development Lesson 3: Being an Artist or Designer Means Understanding Both Art and Design

“I like to imagine it as a technical/visual spectrum,” explains Matt. “I’m more on the technical side of the spectrum, but I have co-workers who approach problems from an incredibly visual perspective — and we all have roles we focus on.”

On “Rise of the Tomb Raider,” for example, a technical designer worked on the systems that formed the gameplay itself — such as scripting and balancing Lara’s weapon upgrade system. A visual level designer worked on the world-building and layout of what Lara was exploring. “That included climbing,” Matt adds. “‘Rise of the Tomb Raider’ had a lot of climbing, and they’d map out what Lara could traverse.”

That being said, even if there are dedicated roles on a team, Matt says everybody needs to learn how to manage the partnership between art and design — specifically, understanding how much the two sides need each other. At Crystal Dynamics, Matt says the environment artists and level designers working on a particular level will sit near each other, and talk nearly every day — what Matt calls a constant communication loop. “Simply put, artists help improve design, and designers help improve art,” he adds. “As an environmental artist, you’re oftentimes building art the player can interact with — for example, objects used for in-game puzzles. These objects need elements that a level designer works on, such as metrics determining their size.”

As a final game development lesson, Matt says not to let it get to you when months of game development work translate into only seconds of content in the game — that’s just how game production works. “I spent about two months working on Lara’s office,” he explains. “It’s in the game for maybe a few scenes.”

If you’d like to learn more about game design software, here’s a look at some tools to be thankful for, or you can browse all of our Game Design Tips and Trends posts.