What movies taught us about sexual misconduct: ‘No’ often meant ‘maybe’

Glenn Lovell teaches at USV and has written about film for the Boston Globe, Los Angeles Times and Variety. This article first appeared in the San Francisco Chronicle and has been lightly edited.

As new allegations of sexual misconduct arrive daily — from the high-tech sector, academia, state and national politics — it’s time to circle back to the entertainment industry and ask: What role have the movies played in conditioning a generation of men to believe, no matter the resistance, that they are entitled to sexual favors from interns, colleagues, and fans?

With apologies to Rodgers and Hammerstein, a variation on their show tune about prejudice keeps playing in my head:

Men have to be taught from year to year /

That sexual harassment is nothing to cheer /

They’ve got to be carefully taught.

Examples of men physically abusing women in the movies are legion. We can trace them to D.W. Griffith’s silent “Broken Blossoms” and, later, “The Public Enemy” (Cagney using Mae Clarke’s face as a grapefruit juicer) and “The Philadelphia Story” (Cary Grant shoving Katharine Hepburn backward through her door).

Because many of the alleged abusers now in the news — from fallen studio exec Harvey Weinstein and screenwriter-director James Toback to actors Kevin Spacey and Richard Dreyfuss — are Boomer age, they most likely were reared on movies from the 1950s and ’60s, when limits were less well defined and “no” sometimes meant “maybe.”

This, of course, can never be taken as justification for sexual harassment or assault. Hollywood has always been a lousy source of advice on how to conduct yourself in real-world relationships, where “no” means “no!”

The movies of Weinstein’s and Spacey’s youths trafficked in a troubling double standard: When an alpha male demanded affection onscreen, it was exhilarating and romantic, perfectly normal. When an aggressive female demanded attention, alarm bells sounded. “Alert! Alert! Aberrant personality!”

In “The Graduate,” Dustin Hoffman’s Ben Braddock follows Elaine Robinson to UC Berkeley. In 1966, we applauded his determination. He was a die-hard romantic who wouldn’t take “no!” for an answer.

When Charles Grodin in “The Heartbreak Kid” abandons his new wife on their Miami Beach honeymoon to pursue a spoiled sun goddess (Cybill Shepherd), he was seen as an incorrigible cad, yes, but one who was living the American Dream. 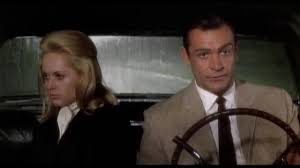 I saw Hitchcock’s “Marnie” when it opened in 1964. I was 15. Sean Connery, working the sangfroid that had served him as agent 007, hires a private eye to find Tippi Hedren’s troubled title character, and when he runs her to ground, he sounds much like a big game hunter who has bagged a trophy antelope: “I’ve tracked you and caught you and, by God, I’m going to keep you!”

I can still remember the rush I got from Connery’s snarled pronouncement. It reinforced the sense of entitlement that we Boomer males learned from the movies, where persistence that at times amounted to societal-sanctioned rape was rewarded. Indeed, later in the film, Connery, claiming matrimonial prerogative, rapes Marnie on their cruise-ship honeymoon.

A decade earlier, in “On the Waterfront,” Eva Marie Saint’s Edie attempts to fend off Marlon Brando’s Terry Malloy. He breaks down her door and pins her to the wall; her pounding fists and cries to “Stay away from me!” soon give way to an embrace. This forced compliance was considered so exciting at the time the scene made it into the trailer.

It’s no coincidence that Toback, Dreyfuss, Steven Seagal and others who have been accused of sexual harassment and assault are in their mid-60s to early 70s. Producer Weinstein, in a statement after the New York Times’ publication of allegations by Ashley Judd and Rose McGowan, used this as his defense.

“I came of age in the ’60s and ’70s, when all the rules about behavior and workplaces were different,” he wrote. “That was the culture then.”

Dustin Hoffman was recently accused of inappropriate sexual overtures toward a 17-year-old production assistant during the filming of a 1985 TV adaptation of “Death of Salesman.” Ironic, no? His Ben Braddock character in “The Graduate” was once embraced as a counterculture icon for turning his back on his parents’ materialism and hypocrisy. Now, as we wince through Ben’s public shaming of Elaine (at a strip club, no less) and his dogged pursuit of her in Berkeley, the character seems more alienating than alienated. Once condoned as funny and irreverent, his behavior today would qualify as stalking and warrant a fine or jail time.