Dustin Aber teaches 3D Modeling, both in Cogswell’s traditional sculpture studio and digitally. His students consistently rave that the value of the lessons they learn in one helps them improve in the other. He often consults with startups and major studios alike.

Video games have huge budgets and sex appeal, but all these games are based on rules and concepts developed from physical games.  In this article, Eddie Zakoor and Phil Vestal, two of the founders of Shadow Squirrel Games, creators of Wanted Earth, a RPG tabletop miniatures game currently on Kickstarter, sit down with Dustin to discuss the process of developing a modern tabletop game.

Dustin: For a certain amount of time, maybe up until like the late 80s, early 90s, there were a lot of pen and paper RPGs, miniatures games with RPG rulesets…there was a lot of Tabletop stuff.  And then home video games came out and it really sucked a lot of wind out of that whole community; there was a whole generation who never played D&D, basically.  They may have played Monopoly or something, but that was it with their experiences.  The generation after has started to come back to it. Eddie: My background was video games, Xbox and MMORPGS, but I thought it was cool that you can be with a group of friends, in person, because I was used to being on headphones talking to people across the country.  Which is fun, but it’s nice to be in person.  I played a bunch of board games, but there are a lot of things that I didn’t like, that didn’t really fit with this age when people’s attention spans are a little shorter and they want a more epic experience in the time that they’re spending.  And so that’s what drove me to create Wanted Earth.

Phil: If you look at the level of art used in it now…that can draw some video gamers in as well.  What did we grow up on as kids? It was like Stratego and Monopoly, right? And so, all of a sudden they come out with Goldeneye for N64 and I remember the first time I went to a friend’s house and Goldeneye was there, and I’m like, “Man, this is so much better than Monopoly!“  You know what I mean? It was just … the art was so great. And that’s not to slam board games from a long time ago, but if you were at the tabletop convention GenCon recently, and if you walk around looking at the board games, it looks like you’re looking at a video game cover, because the art is just so out of this world and immersive that you can get that same visual appeal now, in the board game world; they’re getting the same level of artistic ability.

What happened for both of us is we each had children and, as much as we love a lot of board games, especially miniatures games, if they are going to take four or five hours to play, sometimes just an hour to set up, it became something that was no longer feasible in this life stage.  It was often very complicated in terms of the type of materials needed to play the games; tons of small little components.  And, again, that can be an absolute blast, on occasion, but for where we were coming in life it was like, “Man we love these games, but how can you? Is there a way to sort of enter the market with a game that’s just as immersive, that has an epic story, that is miniatures and RPG driven but can be sort of simplified?”  Not in terms of simple strategy, but simplified in terms of “Hey, we can pick this up easy.”  It can be played in the same time frame as Catan or A Ticket to Ride, you know, some other normal board game.

Dustin: When you’re going through the game design process, you have to develop the lore, the backstory, and the visual aesthetic.  You need to develop the goals for the player, and the ruleset to get them to those goals in a fun way.  You have to figure out the market: Who are the players who want to play this? How long are they going to play? Then, how can we attract those people? That’s a huge challenge – what was the process that you guys went through to do all of that?

Eddie: I’ve created worlds since I was a kid, and I wanted to bring that to fruition through a game, and I thought a board game would be a good starting point for that.

Phil: The story kicked it off, and then we started thinking in terms of, “Hey you know, we love these miniatures games. They’re a lot of fun.” It’s really cool to kind of have that RPG-ish feel on a board, you know.  Building up a character, going through almost like a video game-ish feel, but on a board.

Eddie and (his wife and game developer) Anneke originally started hammering out the basics of that game, developing gameplay modes like 1v3, PvP, Solo modes, etc.  Then playtesting was the next stage.  We just took it everywhere: friends, family, games stores, Protospiel (a game design meetup/convention), and were just play testing for probably about a year before getting to reviewers.

Honestly, so much came from play testing.  I mean no one can possibly underestimate play testing because every time you sit down with someone they’re going to give you further insight.  Even if they say something that’s not helpful; watching them play, seeing how they think, seeing what they’re doing helps you better improve the different aspects of your game.  And that really flowed into the marketing as well, because as people were play testing, what started happening is they would take ownership of the game.  So then, we’re building our market as we go through play testing, because someone would say, “Man, I love that game!”  They then had some input in it, and then they would tell their friends.

Dustin: Yeah, so one of the things you see all the time in Indie PC games is they’ll have amazing gameplay, and they’ll have a core of fans because the gameplay is tailored extraordinarily well to that niche market, but then the aesthetic and the visuals are poor.  Because of this, they can never really expand out of that niche market.  One of the things about this game, and it’s really a very difficult thing to do, is to have a very clear aesthetic that fits the genre and gameplay, and keep it consistent when you have multiple artists, are managing 2D card art illustration, 3D art, UI, font, etc. 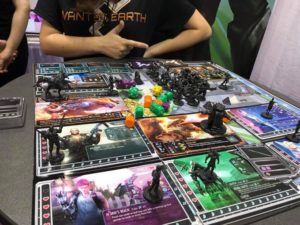 Eddie: We met our main 2D artist at C2E2 a couple years ago, his name’s Ritchie, and I hit it off with him and he got my vision right off the bat.  I would mention a game where I wanted this part to feel like this game, and another part to feel another way, and he would get it.

Phil: He then brought on guys that he knew could match the art style.  Eddie did a massive spec list on Dropbox, we’d go through Google and find images; like here’s the guys face we want, here’s the hairstyle, here’s the clothes we want.  Ritchie took that and then found a few friends willing to work on the project as well.  He was the in-between to guide them, the voice that says, “Hey here’s more the style we’re looking for.”

Dustin: A lot of people who are inexperienced with the professional art process aren’t aware of how much revision is necessary…

Phil: The number of hours we spent on Skype with Ritchie…I mean, every step of the way, we’d say, “Okay, here’s the sketch of the guy.” And then we’d make changes. “Okay, here’s the next level.” And so the artists were just really, really open in that sense to working with us and making corrections and putting in the time. I think if they weren’t as dedicated as they were, the style would definitely have not come across. But they really put in the time and allowed Eddie to really make all the changes necessary. And then Ritchie just went over the top to make sure that all of it had the same feel to it.

Dustin: Thanks for taking the time to talk about this game – it was fun to work on, and I hope it does well!