A Venture Documentary Experience: Interviews about the audio post-production process

The African Technology Center came to USV after seeing the audiovisual pieces that MediaWorks has created over the past few years. The center’s documentary movie Venture about the international journey of five emerging and leading African entrepreneurs ending in Silicon Valley was already shot and edited. However, the film needed complete audio post-production services, as the location audio was very poor quality. Narration had to be recorded, original music composed, music editing and sound design all had to take place. The project also involved dialogue editing, audio restoration, voiceover recording, music mastering and audio post-production mixing.

A group of 6 USV Digital Audio Technology students, led by ex-audio and music industry professional faculty, completed the project under the pressure of a tight deadline over the winter holidays. Featuring the entrepreneurs’ stories, discussions, interviews and speeches (including then-President Obama’s), the film premiered February 2017 in Menlo Park, California, and received a warm reception by the audience.

Below are three interviews about the audio post-production process for Venture. When you described the project to our students, how did you pitch it and their role in bringing it into the world?

I urged them to join a legion of global change makers. We described the project as an ongoing series of creative content that will showcase the aspirations of African entrepreneurs as they take their technology ideas to a global scale. I urged the students to join the creative process and lend their expertise in audio post-production, sound design, and music compilation while they served as our official post-production partners. How did you decide to work with USV students?

What stays with you about the audio post-production process experience?

The professionalism of every member of the audio post-production team and their commitment to on-time delivery was a pleasant experience.

How did the Venture project pose challenges to the team?

The obvious challenge was the timing: the team had to work over Christmas to get the work done. While this isn’t unexpected in the industry, it’s definitely not typical for students who tend to spend their winter break away from school. However, the team didn’t need a lot of encouragement. On one hand, members of the student audio team understood the importance of their work, both for the sake of the production and for their portfolio. On the other hand, we utilized technology to bridge the distance between our studios and those students who traveled to their families across the country: between portable software licenses, file exchange through our FTP server, real-time online communication tools and a few laptops, the team members all completed their part.

What specific approaches stand out that served the project’s unique challenges?

For students, the unexpected technical challenge was the amount and depth of audio restoration work they had to do. Some of the dialogue was on the borderline of unusable due to distortion and noise bleed. ADR (re-recording the dialogue) was not an option either. Even the latest restoration tools were struggling to bring the dialogue to an acceptable level, but with some manual work and a few handy tricks, the team ended up producing an intelligible dialogue track that was ready for the audio post mix. What’s interesting is that the tools that helped to achieve the best results at the end were the most basic plugins, such as equalization and compression. However, it was critical listening and precise, manual (and sometimes unusual) settings that made a world of difference. According to producer Stephen Ozoigbo, the USV team saved the film. The latest technology is great, but knowing how to best utilize any technology is greater. After all, it took less than a floppy disk worth of operating system memory to put a man on the Moon. 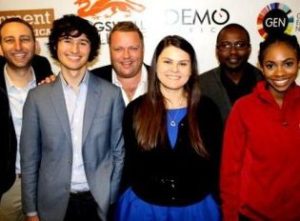 What challenges caused you to change your approach or re-calibrate your perspective?

The main challenge we had to work with came from poor location sound.  We spent a lot of time going through it trying to restore as much as we could with the files that were given to us.  Once we got them to where we wanted, we mixed them in with the sound design and realized we needed to do more.  We were so focused on restoring the audio that we lost sight of what was actually “clean” audio!  Once we heard it with the rest of our work, we realized there was more to be done and got back to work on it.

How did you change your point of view?

My point of view definitely changed when we started the post mix.  I liked the content of the film, but it just felt like a boring documentary.  Once we brought in the music and sound design, it felt more alive and energetic.  It was a weird feeling seeing the premier of the film and thinking back on how far the audio came before others saw it. It’s definitely an experience I won’t forget!